There’s a certain logic to Vladimir Putin’s unhappiness over the sudden uproar to fixed elections.

The West’s reaction is, after all, reminiscent of Captain Renault closing down Rick’s cafe. Russian elections have been rigged since there has been a Russia again and during the entire history of the Soviet Union before that.

I covered the Davis Cup final in 1995 in Moscow, during a Boris Yeltsin election campaign. At the time, political parties were restricted to a million rubles in campaign spending, total for the entire election nationwide. That was about US$250, or a month’s wages for my first job in Russia, at Moscow News, where we foreigners were far and away the biggest wage earners.

I forget who the title sponsor was — NEC, I think — but they had an enormous poster covering an entire wall courtside in Olympiskii Stadium. The next-biggest presence was Nash Dom — Rossiya, Yeltsin’s Our Home — Russia party, which had a poster with the party slogan and logo and a closeup of Boris — drunkard’s nose tastefully airbrushed — about one-quarter the size of and adjacent to NEC’s, as well as campaign posters throughout the complex, on virtually every pillar of suitable size.

During a press tour of the facilities, I asked what NEC had paid for its advertising, and it was a large sum — millions of dollars, if I recall correctly — to be the title sponsor for the Davis Cup; the signage came with it. And the pictures of Yeltsin? Nobody knew at first, but I kept at it, standing and asking until the PR person found his boss, who after a show of annoyance decided the big picture was besplatno — free — as 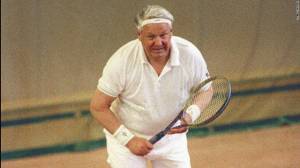 a way of thanking the glorious leader for his support of tennis in the new Russia. The other, smaller pictures were expressions of free speech by individuals, although there were plenty of OMON troops around to make sure nobody expressed any unauthorized free speech and no other posters.

That was typical: One party had access to free advertising whereever and whenever it wanted, fawning coverage from the state-owned media and little or no comment from the west, so as long as trade deals were being made, fortunes amassed and pipelines opened so multinationals could buy up Russian industry and at pennies on the dollar from their managers — former Communist Party bureaucrats to a person — democracy shrivelled on the vine and everybody who was able got rich looting the country.

Then, after Putin took over, George Bush decided he was a man “deeply committed to his country and the best interests of his country,” and it stayed business as usual.

I heard a rather truculent Russia watcher on NPR the other day, pretty much taking Putin’s side, arguing that these were in fact pretty clean elections by Russian standards, so the U.S. ought to butt out.

The problem, it seems to me, is that the Russian people see what is going on. They understand that democracy is coming to places like Libya and Egpyt and they don’t understand why they should sit by and let the country slide into a complete police state run by a mixture of criminals and former KGB men, paid off by multinational corporations, while the average person on the street struggles to make ends meet and has no guarantee of personal freedom.

Putin who, as a former officer of the KGB, must understand how difficult it is to control a state the size of Russia with standard secret police tactics, has worked to maintain a veneer of popular support. It has, at times, even been real popular support.

But the past few years have seen more show trials of political opponents, more murders in Russia and elsewhere of effective critics of the Kremlin, more centralization of power in Putin’s hands and ultimately more widespread recognition that he intends to keep power indefinitely, by any means necessary.

My sense is that some Russians see the impending re-election of Putin after three terms in power (most recently with his lapdog, Dmitry Medvedev, as the titular head of state) as the next step along a long road to the darkest years of Communism.