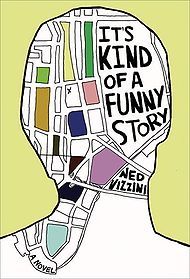 Personal reaction to the book: This has strong overtones of One flew over the cuckoo’s nest. It’s not quite in that league, but a good read. Somehow the book is both less dismissive of and less dependent on the role of the therapist in solving teenage psychoses than some others. I liked the ending — happy without being Pollyannish — and the use of humor throughout.

I, like many others in the class, was sorry to hear that Ned Vizzini couldn’t conquer his demons.

Author facts: Many aspects of Ned Vizzini’s life – where he lived, his time in a mental ward, his depression – echo those of Craig Gilman, the protagonist of this novel. He killed himself by jumping off of a roof in 2013 at the age of 32. He was survived by his wife and a son.