So I was watching the LA feed (hey, free is free) of the Kings / Leafs game and Drew Doughty lost his helmet and was skating around with his hippy hair flying in the wind. The color commentator (Jim Fox … I had to look it up) said it reminded him of the old days, with Guy LaFleur’s hair blowing behind him, or Gene Carr … <insert joke sound effect here>. Wait, who?

Point A, this is the first time I have ever heard Gene Carr mentioned in the same breath as The Flower. It’s possibly the first time it’s ever happened. And Point B, guys with ’70s hair comparable to LaFleur would start with Gilbert Perrault or LaFleur’s Montreal teammate Larry Robinson or Bobby Clarke (who 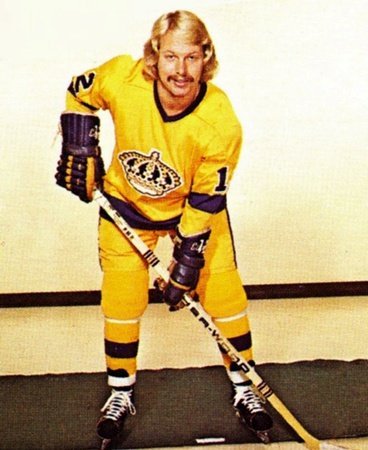 pretty much had Farrah Fawcett hair) or Derek Sanderson or Ron Duguay or … well, it’s a long list. So I looked up the LA Kings mustard-PJ days to figure out what the heck Fox was talking about, and sure enough, there was Gene Carr.

So first, for the record, I would like to apologize to Mr. Fox, who I do remember, as an undersized center in the Marcel Dionne (on a bad day for Marcel) model. I still think expecting any but the staunchest old-school Kings fans to remember Gene Carr is pushing it. (Although there is at least speculation on the interwebs that The Eagles’ wimp-rock classic “New Kid in Town” was written about Carr’s move to Los Angeles from NYC, so gone but clearly not forgotten).

But dang, that is some legendary hair.