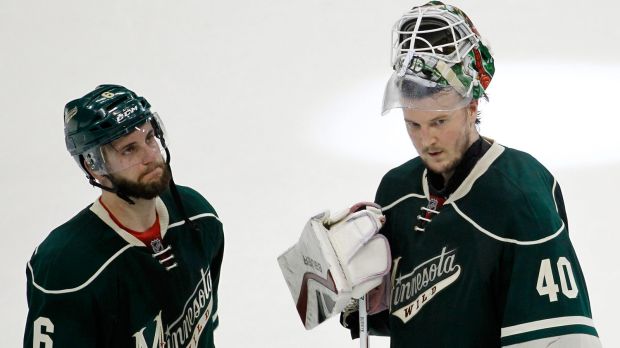 The big story down the stretch last year was whether journeyman goalie Devan Dubnyk was the second coming of Tim Thomas … a goalie overlooked at the NHL level until he was in his late 20s who suddenly blossoms into a legitimate Vezina candidate. Minnesota — with really no good options — gambled that the answer was yes and gave Dubnyk a big new contract.

Now I confess I’m a skeptic in the first place, because even during his hot streak last year, I kept waiting for Dubnyk to get lit up because I just don’t see him as an elite goalie. That sort of happened — he had a so-so playoffs (.909 save percentage, goals against over 2.50), but he wasn’t embarrassingly bad.

Embarrassing was with Nashville, where he had a .200 save percentage while shorthanded. It’s a really small sample, just 5 shots, but one save on five shots is almost impossibly bad for a guy as big  as Dubnyk. Fact: When you’re six foot six, pucks gotta hit you. So no, Dubnyk is not sub-.900, mediocre AHL goalie bad … in part because he’s too damn big to be awful. But I don’t see a lot besides big. He’s not overly quick, he doesn’t get side-to-side better than he needs to. For a while last year, with his confidence up, he made saves he shouldn’t have. But I don’t see him able to do that year after year (and he didn’t in the playoffs) because pucks get through him. That is to say, once in a while, he gets into position on a shot but doesn’t manage to stop it. Maybe it takes a little deflection or there’s a screen or maybe he just doesn’t track it right. It doesn’t take a lot of those to turn all-star into alright. Over 50 33-shot games, a .925 percent goalie stops 1,525 out of 1,550 shots. A .909 goalie stops 1,500. So far this year, Dubnyk is a .909 goalie.

Just before I started this, I flicked over to watch a couple of minutes of him going back to Edmonton, where his career began and there was Dubnyk letting in a 50+ foot slapshot that put his team behind, 3-2. Minnesota came back to gift Dubnyk with the win, his fifth of the year, but that was despite their goalie, not because of him. 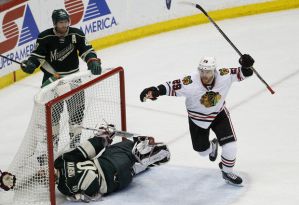 Over his NHL career, Dubnyk has been a .916 / 2.67 goalie and that’s what Minnesota should expect. On a defensively aware team with Ryan Suter playing 26 minutes a night in front of him, that is enough to win a lot of games, but it’s not going to win you a Cup Tim Thomas, Jonathan Quick, Patrick Roy, “thou shall not pass” style.